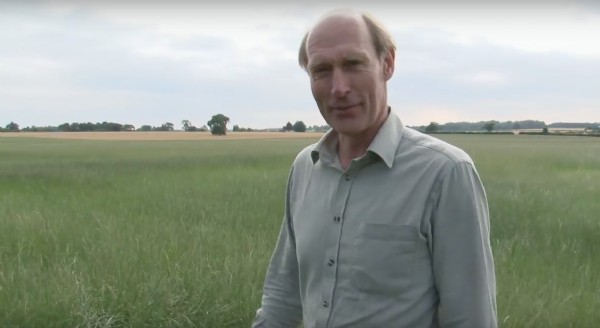 This equine and arable farm in Little Horkesley has been owned by Stephen March’s relations since just after the First World War but when Stephen and his wife took it over twenty years ago they decided on a new direction, inspired by their great passion for horses; Stephen has raced, ridden and hunted all his life and his wife and daughter are both keen event riders.

As a result, they have a wealth of knowledge of the equine market and decided to turn this to their advantage as well as being able to enjoy work close to their hearts. They became among the first sub-growers of haylage, supplying it to distributor Mark Westaway.

Unlike hay, haylage is baled when it is still moist and is preserved by excluding the air to eliminate mould and degradation. The moisture content means that when the bales are opened, the product is still damp so there is no dust or spores. As a result it is much healthier and more nutritious.

In 2001 Stephen began his own production. Initially, the bales were small and round but he found that square baling allowed bigger bales ideal for the ample requirements of haylage - horses can eat 5-10 kilos per day.

Part of the March’s farm is still arable, but a third is laid to grass, some of which is permanent, while 20-30 acres has been turned over to haylage, supplying flat race trainers in Newmarket.

The previous grass seed mixtures Stephen had used were not well suited to the type of haylage the equine market demanded, as they dried out too quickly in the field. The land is predominantly heavy and since ryegrass can take up a lot of the moisture retained from spring rainfall, this is not ideal, because of the high moisture content required for top quality haylage.

‘The key to what we do is to get an even crop of consistent dry matter,’ recounts Stephen. ‘We were looking for something to go into a three year rotation which is high yielding and can then be used to graze our small suckler cow herd after cutting. Cotswold Seeds suggested we change to a Hybrid Ryegrass Ley, which was sown last October.’

The robust Hybrid Ryegrass Ley is ideal for haylage as it produces good grazing in the autumn and a high yield in the spring, holding lots of moisture when young and cut, but drying out slowly and evenly.

The haylage on the farm is now grown in ‘blocks’ of 10 acres to ensure a steady supply year-on-year. The crop is drilled and rolled in September or early October and in spring the ground is then chain harrowed, flat rolled and fertilised in March, with 100 kg per hectare nitrogen, the standard management of haylage leys. The aim is to get the nitrogen on early so cutting is not too close to application and there are minimal residual nitrites in the crop. The first cut is taken in the first week of June with a second cut taken 6-8 weeks later, ideally in the third week of July, depending on the weather. The cows then graze it until November.

‘The haylage yield from the Hybrid Ryegrass Ley has been excellent,’ Stephen says. ‘100 tonnes from 11 acres plus additional aftermath grazing. This is a record for our production.’

What is fodder beet? An excellent winter feed crop

The Mow Down: Autumn Hay Leys