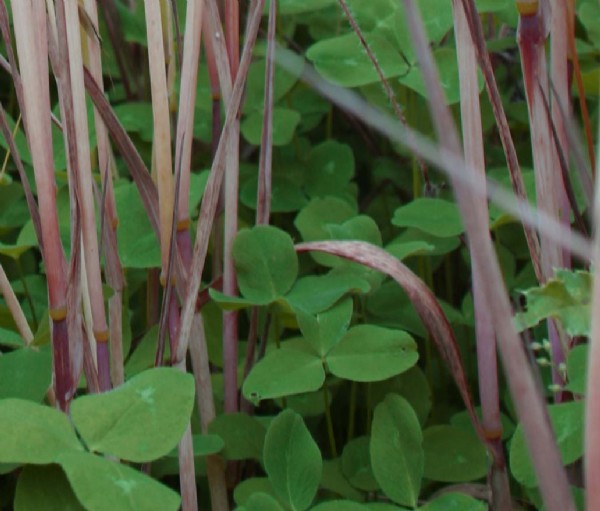 Worldwide fertiliser production has its problems these days. There isn’t so much about and so what there is is expensive. To make matters worse, the process of making N fetiliser requires lots of energy from either gas or oil. Not a good situation. A farming generation has become dependant on low cost N fertiliser and, whilst it was plentiful and cheap, we heard few complaints, but times change.

The days of £70 a tonne for N have long gone. The cost of purchased N has risen well beyond any increases in farm gate prices. We are at the point where it will become cheaper to grow crops that are not harvested but ploughed back in to the soil to provide the most important plant food, nitrogen. Nothing new here. Go back thousands of years to the ancient Chinese and Greeks to see it done. They didn’t know exactly why some crops did better after a legume crop, but they knew that they did. These days we have a far greater scientific insight into how legumes like clover fix N into the soil. But, as yet, we have not fully exploited this knowledge. The high fertiliser price may well be the catalyst. But if this doesn’t bring change, then increasing environmental concerns will.

Stockless arable farms have been encouraged to adopt a simple industrial-style rotation, but this system is increasingly being criticised for ignoring the soil degradation that it can cause.

Nothing improves soil more than adding organic matter. Soils with higher organic matter contents are easier to work and grow better crops. This is well known. Every year, due to cultivations, a crop uses between 2-5% of the soil’s reserve of organic matter. The use of inorganic fertiliser adds nutrients but no organic matter.

Organic matter levels in most UK soils range between 1-6%. In England however, nearly half of soils measured by the National Soil Inventory were in the lowest category. The same applies across Europe, and there is concern at EU level regarding low levels of soil organic matter and associated soil erosion problems.

It is the stockless arable/horticultural units in the southern, midlands and eastern parts of England where the need to find sources of organic matter is greatest. Supplies of farmyard manure and the associated grass leys that the livestock enterprise provide are not commonly available. The reintroduction of livestock is unlikely as the necessary (and costly) infrastructure of suitable buildings
and fencing or hedging are long gone.

Growing green manures in rotation is one obvious way of providing soil organic matter and plant nutrients, especially nitrogen. In light of high fertiliser prices this is an increasingly viable option.

What is a Green Manure?

A green manure is a crop grown with the intention of benefiting the next crop. These are sown, grown and mowed and finally ploughed or cultivated back into the soil. Green manures have many advantages but have two key roles: they add organic
matter to soil, and make nitrogen and other nutrients available to the next crop. Some crops, namely legumes, fix N into the soil. Others mop up available nitrate from the soil and release it over many months after incorporation, especially good for wheat or brassica crops. Both N fixers and lifters add organic matter to the soil. Green manures fit between cash crops. They can be sown for a summer or over a winter. To get the best effect, grow a grass/red clover mix for one or two years.

By choosing green manure crops carefully we can select those that supply the soil with nitrogen, or those that are able to have a significant impact on soil structure. Both are important, and there is a compelling case for combining both nitrogen-rich
and carbon-rich types to get the maximum benefit. We recommend that growers use a mixture of clover (nutrients) and grass (carbon).

What to Grow Over Winter

Winter green manures accumulate nitrogen and protect the soil from winter erosion. They also produce a large amount of biomass for soil improvement or even silage.

Any ground which is to be left fallow or without cover over the winter can be sown with a winter-hardy green manure. These green manures normally precede a spring or summer sown cash crop. Winter green manures such as rye or westerwolds ryegrass (nitrogen lifters) scavenge excess nitrogen from previous crops. They are also an excellent tool to prevent nitrogen leaching with winter rainfall. Some can absorb up to 90% of nitrate within the soil that would otherwise be leached. The nitrogen held within the green manure crop is released when it is incorporated.

Some leguminous crops (nitrogen fixers) can be used for winter cover and, provided that these are sown by September, can fix up to 200 kg/hectare of free nitrogen for use by the following cash crop. These green manures also effectively protect the soil from erosion. They produce a canopy which stops rain pelting the soil and enables water to drain effectively. Winter green manures also suppress weeds and are particularly effective against those which germinate in low temperatures, such as chickweed and annual meadowgrass.

These quick-growing green manures are fast to establish. They are short term, lasting between two and six months. They can be sown on their own between cash crops or as an understory to a main crop. They are sown to add organic matter, fix nitrogen and suppress weeds.

There is often an opportunity during warm weather to grow a fast-growing, fleshy annual green manure. These crops add organic matter, mop up surplus soil  nitrogen, suppress weeds and act as a break crop by interrupting pest and disease cycles. Summer green manures are planted from late spring onwards on bare ground, or immediately after cereal harvest, and are incorporated before the sowing of a winter cash crop. A good summer green manure will be ready for turning in after only 8 - 10 weeks.

These crops give good leaf canopy cover to block out light, suppressing weed growth. They are easy to establish with many species able to grow on the soil surface without the need for cultivation. The seed is cheap and the crops are usually very reliable. One further advantage of these fleshy annual plants is that incorporation is simple. Green crops should be worked into the the soil at least three weeks before sowing small-seeded crops. All summer green manures must be destroyed before setting seed.

Inter-cropping is the growing of a green manure at the same time as a cash crop. Seed is sown into a newly established cereal or brassica crop, usually in the spring, and left underneath until the main crop is harvested. After this harvest the green manure grows strongly and establishes a full cover. This technique enables the use of small-seeded, nitrogen-fixing legumes. These legumes are slow to establish which means they shouldn’t interfere with the harvest of the main crop. Once the main crop is harvested, they can be left as a summer or winter-cover green manure. Incorporated in the autumn, they provide organic matter to improve soil and N availability for the following cash crop.

Arable Innovator of the Year Award

The No Till Crimper Roller - Episode 4