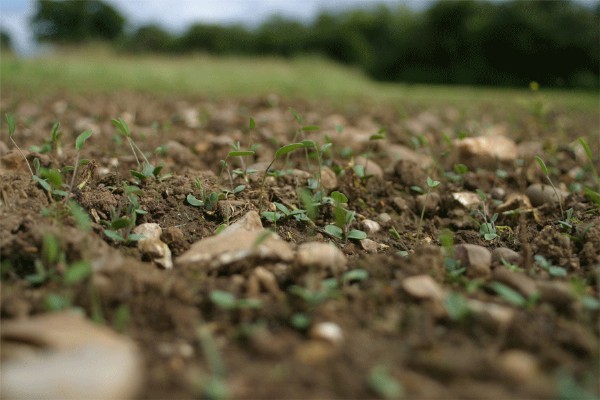 In 1943, a Nottinghamshire farmer William Lamin said “It’s like throwing money away to put ryegrass on dry land…” Lamin farmed light land and the point he makes is relevant. Why put a shallow rooted ryegrass that needs a lot of moisture on soils that cannot provide it.

He farmed a variation of the Clifton Park system for over thirty years and believed it was possible to improve drought-prone soils by building humus levels. Leys containing deep rooting species were sown for four years and then ploughed under leaving humus and fertility. He was perhaps ahead of his time and it is sad that his methods were abandoned when the application of artificial nitrogen became fashionable.

So is it worth considering a return to these soil enriching ley mixtures of old? Deep rooting, non-ryegrass leys provide more reliable production and higher yields compared with burnt up ryegrass. In addition, lighter soils are substantially improved by introducing these leys into the rotation.

Humus Building Ley
Lamin's ideas were based on a seeds mixture which formed the cornerstone of the Clifton Park Farming System. The original micture formulated by R H Elliot was complex and contained many different species. The main component was drought resistant cocksfoot. Then, as now, some farmers were reluctant to use too much cocksfoot as it was inclined to grow coarse and in clumps. However, this is only a problem when seed is sown too thinly allowing the cocksfoot too much freedom. Lamin went on to simplify Elliot’s original mixture and an example of his mixture can be seen here.

The mixture is drought resistant and provides growth from early spring until late autumn. Cocksfoot also recovers very quickly after cutting or grazing. Clover and herbs make the mixture palatable and should offset any disadvantages associated with cocksfoot. The cost of such a mixture today would be in the region of £72 per acre, which is more than ryegrass based leys. This is due to the higher cost of seed reflecting the lower seed yield from these species. However, the leys last for a good four or five years and need little or no artificial nitrogen. Phosphate and potash levels would need to be maintained at a soil index of 2 to optimise production.

Sowing Time
This type of mixture should be spring or summer sown being slower to establish than ryegrass, and is not suitable for late autumn sowing. Ideally, it would not be undersown to a spring cereal, which would act as a nurse crop. The sowing rate of cereal should be cut to two thirds of normal to allow space for the smaller seeds. Best results will come if the grass seed is broadcast and lightly harrowed into a firm and fine tilth. The seedbed should then be firmed by rolling. Drilling small seeds with a wide spaced corn drill should be avoided, as many of the seeds will not come up if they are sown too deep.

Forage Quality
In recent years most of the research conducted has concentrated on ryegrasses. However, from the data we have and feedback from those farmers that grow these leys, there is no reason to suppose that this type of mixture will produce poor quality forage. In fact, given the beneficial contributions from the clovers and herbs it is likely that this type of ley may well produce a more balanced forage. Certainly, it will have a high protein content, contain vitamins and minerals and should provide sufficient carbohydrate.