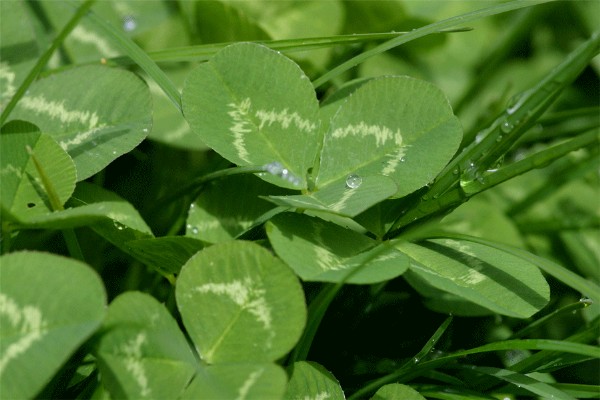 Scott Laidlaw has received the British Grassland Society award for his outstanding contribution to the understanding of grassland management. He is currently working at The Department of Agriculture in Northern Ireland and here explains how to manage grassland to exploit white clover.

Although the potential value of white clover as a source of N and as a highly nutritive feed is well recognised, exploitation of white clover in grassland systems within the UK has been limited. Generally the contribution of white clover to herbage production is perceived to be less reliable than the highly predictable response of grass to N fertilizer application and the nutritional benefits of white clover are countered by the fear of bloat.

Undoubtedly, the standard of grassland management required to successfully exploit white clover in mixed swards is higher than that for N-fertilized grass swards. White clover is more sensitive to its environment than grass and the balance between grass and clover is complicated by clovers ‘asterism’ much of the clover in in the soil becomes available to grass, increasing the competitiveness of grass toward white clover. This often results in the demise of clover, and leaves clover open to the charge of not being persistent.

Critical Stages
The skill needed in managing white clover in mixed swards is in controlling the competitiveness of grass especially at critical times in clover’s growth cycle. However, control should not be too severe otherwise the sward becomes clover dominant, leading to reduced herbage yields, increased risk of bloat, and excessive nitrate leaching from recycled N in grazed swards.

Critical stages in clover’s development are at the establishment and in late winter – early spring. Therefore the first step in the control of grass is at seeding and early establishment. Having selected the most appropriate cultivar (or cultivars) of grass and clover for the conditions for which the sward will be managed, guidelines for sowing and establishing a grass/white clover sward should be followed to reduce the risk of early failure.

In Summary, these are:

By following the above, the white clover seedling is given every chance to develop to the stage where it begins to produce stolons (runners) which become the basis of the plant’s ability to survive and spread in the established sward.

Although white clover is potentially subject to a wide range of pests and diseases, there is no evidence of any one being a severe prevalent problem, with the exception of clover rot which is overcome by using resistant varieties. Should pest or disease be suspected of causing serious damage to white clover, specialist advice should be sought to identify the problem and recommend a remedy.

The other stage which is critical for clover is at the end of winter when its reserves are low and some of the stolon network breaks up. As temperature begins to rise, grass responds quicker than clover by producing a leaf canopy. Clover in its weak state is denied the opportunity to capture the valuable light required to produce energy for the plant and so may suffer long-term damage.

White clover can be helped during this stage by ensuring that grass growth is kept under control. Where possible this can be achieved by grazing down in late autumn with sheep. A canopy height of 3cm will avoid the crass canopy overtopping white clover. Spring application of N should be avoided as this will stimulate grass growth and could jeopardise clover’s survival. So, under UK conditions, swards with white clover are not suitable for the practice of building up the ‘herbage bank’ to be carried over the winter, as advocated in the New Zealand extended grazing system for dairy farmers.

Although clover may be scorched by applying dry slurry, it recovers quickly if growth conditions are good. Some experiments have shown a less severe reduction in clover content when applying slurry compared to swards receiving a similar amount of N in fertilizer. The higher requirements of white clover for P and especially K, than grass may partly explain the ameliorating effect of slurry which is rich in P and K. However, the N content of slurry should not be overlooked when making applications in early spring to grass/clover swards and the vulnerability of clover to stimulated grass growth at this time should be taken into account.

Maintaining balance
While grass will interact less severely with clover at other times in the growing season, the association is nevertheless not in long-term balance and so management is important in redressing any imbalances. For example, white clover generally has a higher requirement than grass for the major nutrients other than N and so if theses become limiting, the balance will be tipped in favor of grass. This greater need for nutrients is reflected in the Defra fertilizer recommendations for grass/clover compared with grass swards, whether cut or grazed.

Clover content in grazed swards is usually higher in rotationally grazed than continuously stocked swards, at least in the early years of the swards like. However, clover in rotationally grazed swards is less likely to withstand stress, especially prolonged drought. Hard continuous stocking with sheep may result in a rapid decline in white clover content, but his can be reversed by introducing a rest period. Clover leaves become larger and remain so for some time after continuous stocking is reintroduced. Understocking rotationally grazed swards will also result in white clover decline which will be reversed by reducing the amount of residual herbage in paddocks. As rules of thumb, continuous stocking at sward canopy heights (using a sward stick) of 5 cam with sheep and 7-8 cm with cattle are likely to be least harmful to clover. However, flexibility in management is required as, even under these conditions, the balance is between grass and clover will not be maintained. Introduction of rest periods in continuous shocked systems or adjustments in stocking rates in either rotational grazed or continuously stocked systems will be necessary at times. Vigilance is important to ensure that remedial action is taken promptly.

Bloat
Emphasis so far has been placed on grass being overly competitive with clover. However, there may be times, such as in July or August, when swards become clover dominant (greater than about 60% of the herbage is clover), especially in rotationally grazes swards. In such instances the risk of bloat occuring is increased. These swards should not be grazed in that state; instead the sward can be cut and the herbage ensiled, preferably with and effective additive because of its low sugar content. Judicious use of N fertilizer when dominance begins to become apparent may also help to reduce clover content although grass response may not be high if tiller number have dropped due to flowering. Preventative control measures against bloat include making available high fibre feed (hay or straw), administering an antifoaming agent e.g. poloxalene (in drinking water, lick blocks or in supplements), or drenching with mineral or vegetable oil. The introduction of anti-bloating characteristics is a long-term aim of plant breeders.

Conclusion
Reducing unpredictability in long-term clover contribution and the risk of bloat requires commitment to the rules, regular inspection of the sward and being prepared to take remedial action when necessary. Ignoring any one of the guidelines for establishment will increase the risk of failure. Although a set of guidelines is available for introducing white clover into existing swards, the technique does not assure success as, by its nature, all of the conditions for clover establishment can not be met, compared with the control direct sowing offers. This are needs more study so that the risks involved in oversowing can be accurately accessed and overcome.

Meanwhile research has provided the answers to most of the problems likely to be encountered with white-clover-leys on-farm. Progress needs to be made in convincing farmers of the need to inspect swards regularly and to become familiar with the early indications of problems, especially those associated with white clover contribution. Thereafter the appropriate remedial action can be decided upon and taken. Consolidation for the extra effort involved is a potential saving of 150 kgN/ha or more of fertilizer N, a 10-20% increase in feeding value over grass alone and the satisfaction of adopting a technology which improves the environmental friendliness of grassland farming.

One Man and his Clover