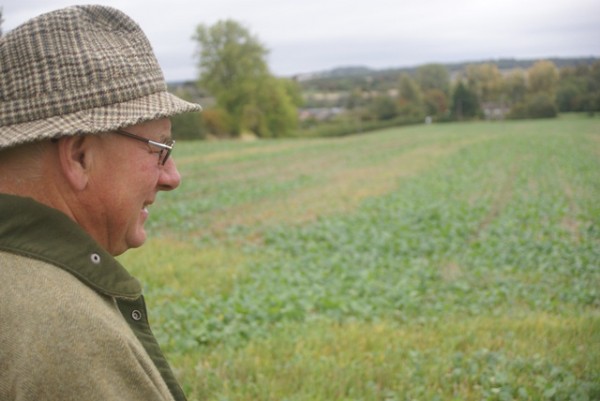 Having grown both straight stubble turnips and straight fodder rape many times over the years, Mr Strainge now opts for a mixture of the two as he thinks they complement each other and produce a more reliable crop. Growing the two together is also less risky if conditions favour one species over the other. Mr Strainge believes that turnip and rape varieties have grown hardier over the years and now hold up well in cold weather, doing very well during last year’s heavy snows.

As Mr Strainge farms on heavy clay and has 2,500 ewes, much of the acreage he puts to the mix each year is on light land he rents from neighbouring farms for the winter. The mix grows well on his own land, but if the winter is wet, the ewes and lambs can get very dirty grazing the root crop. To avoid penalties when sending lambs to slaughter, Mr Strainge has been experimenting with shearing lambs in the summer which keeps them cleaner as they are ﬁnished on the turnip and rape mix. Where the mix is grown on rented gravel or brash soils this is less of an issue.

Various establishment methods have been tried and tested over the years, with a couple of hundred acres grown annually. As root crop seeds will not establish properly on compacted soil, remedial action is taken where necessary. This year seed was direct drilled after the barley harvest, acting as a break crop as well as providing essential winter forage. When renting land from arable farmers, the FYM provided by the sheep over winter provides a valuable boost to soil fertility prior to spring crops.

After establishment, crops are sprayed with a graminicide to counter cereal volunteers, and a careful eye is kept out for ﬂea beetle and slugs, which are controlled if they become an issue.
Around 190 kg/ha of 25:5:5 is applied in the crop’s early growth stages where good establishment has been achieved and the crop will yield well.

The mix is grazed from November onwards, depending on the availability of other forage. Ewes or lambs are put on the mix until early February when spring planting starts. The early-lambing
ewes are then moved inside and the late-lambing ﬂock go on to grass. Mr Strainge ﬁnds the mix very good for ﬁnishing lambs with draws being taken right through the winter to supply his
brother’s butchers shop.

Whether grazing ewes or lambs, root crops are always strip grazed and a runback provided or grass strips left around the edge of the crop. The area needed for the 300-400 sheep in each bunch varies depending on the particular crop and growing conditions, so a careful eye must be kept on each ﬁ eld and fences moved as required to ensure that all stock make the best of this reliable, economical mix

Not Too Late to Sow Early Fold Root Mixture